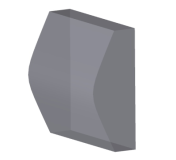 Photonchina’s cylindrical lenses are slightly deviated from a true cylinder in a way that minimizes the introduction of aberrations, which result in a wavefront error of 500nm.Our lenses are fabricated using S-LAH64 optical glass, that is a low dispersion glass with high index of refraction in order to limit chromatic aberration.

Materials like Fused Silica (JGS1) or others are available according to customers request.

About coating: these high performance multilayer AR coatings have an average reflectance of less than 0.5% (per surface) across the specified wavelength ranges. The central peak in each curve is less than 0.25%. These coatings provide good performance for angles of incidence (AOI) between 0° and 30° (0.5 NA). For optics intended to be used at large angles, Photonchina provides a custom coating optimized at a 45° angle of incidence; this custom coating is effective from 25° to 52°.

About Damage Thresholds: when choosing optics, it is critical to understand the Laser Induced Damage Threshold (LIDT) of the optics being used. The LIDT for an optic greatly depends on the type of laser you are using. Continuous wave (CW) lasers typically cause damage from thermal effects (absorption either in the coating or in the substrate). Pulsed lasers, on the other hand, often strip electrons from the lattice structure of an optic before causing thermal damage. Photonchina have to mention, however, the explanation here should be based on room temperature operation and optics in good condition (i.e., within scratch-dig spec, surface free of contamination, etc.), because dust or other particles on the surface of an optic can cause damage at lower thresholds.

The testing method of LIDT

First, a low power or low energy beam is directed to the optic under test. The optic is exposed in 10 locations to this laser beam for 30 seconds (CW) or for a number of pulses (pulse repetition frequency specified). After exposure, the optic is examined by a microscope (~100X magnification) for any visible damage. The number of locations that are damaged at a particular power/energy level is recorded. Next, the power/energy is either increased or decreased and the optic is exposed at 10 new locations. This process is repeated until damage is observed. The damage threshold is then assigned to be the highest power/energy that the optic can withstand without causing damage.

When an optic is damaged by a continuous wave (CW) laser, it is usually due to the melting of the surface as a result of absorbing the laser’s energy or damage to the optical coating (antireflection). Pulsed lasers with pulse lengths longer than 1 µs can be treated as CW lasers for LIDT discussions.

When pulse lengths are between 1 ns and 1 µs, laser-induced damage can occur either because of absorption or a dielectric breakdown (therefore, a user must check both CW and pulsed LIDT). Absorption is either due to an intrinsic property of the optic or due to surface irregularities; thus LIDT values are only valid for optics meeting or exceeding the surface quality specifications given by a manufacturer. While many optics can handle high power CW lasers, cemented (e.g., achromatic doublets) or highly absorptive (e.g., ND filters) optics tend to have lower CW damage thresholds. These lower thresholds are due to absorption or scattering in the cement or metal coating.

Pulsed lasers with high pulse repetition frequencies (PRF) may behave similarly to CW beams. Unfortunately, this is highly dependent on factors such as absorption and thermal diffusivity, so there is no reliable method for determining when a high PRF laser will damage an optic due to thermal effects. For beams with a high PRF both the average and peak powers must be compared to the equivalent CW power. Additionally, for highly transparent materials, there is little or no drop in the LIDT with increasing PRF.

In order to use the specified CW damage threshold of an optic, it is important to know the following:

Pulsed lasers usually induce a different type of damage to the optic than CW lasers. Pulsed lasers often do not heat the optic enough to damage it; instead, pulsed lasers produce strong electric fields capable of inducing dielectric breakdown in the material. However, it can be very difficult to compare the LIDT specification of an optic to the laser. There are multiple regimes in which a pulsed laser can damage an optic and this is based on the laser’s pulse length.

When comparing an LIDT specified for a pulsed laser to the laser, it is necessary to know the following: