The difficulty of PPLN crystal research and development is mainly reflected in the production process. Photonchina not only need to understand the polarization reversal mechanism, but also need to accurately control the additional electric field.

With the development of rare earth doping engineering, LN crystals have been better put into practical applications. For example, high Mg doped lithium niobate has anti-photorefractive properties and has been widely utilized in the laser field and optical waveguide devices.

The most important application of PPLN crystal is laser frequency conversion. The wavelength that can not be obtained by existing lasers is achievable through PPLN crystal. With the progress and improvement of lithium niobate technology, its application field has been gradually expanded. It has been widely used in high-speed optical communication, quantum communication and electro-optic effect. Because PPLN has very high nonlinear polarizability, it also has important applications in nonlinear optical fields such as second harmonic generation (SHG), higher harmonic generation (HHG), optical parametric oscillation (OPO), optical parametric amplification (OPA).

At present, one of the main applications of Photonchina’ PPLN crystal is quasi phase frequency conversion for nonlinear optics. The quasi-phase matching is realized by the periodic inversion of lithium niobate ferroelectric domain. The inverted lattice vector provided by the periodic structure continuously compensates the wave vector matching of light waves with different frequencies in the nonlinear process. It realizes effective coupling, and greatly improves the efficiency of nonlinear interaction.

PPLN crystal has been rather common in the fields of SHG, HHG, OPO, OPA and so on. Another application direction is electro-optic effect. By applying a certain voltage to LN crystal, the refractive index ellipsoid will be deformed and the corresponding optical properties will be changed. Some electro-optical devices have emerged, including phase modulator, phase retarder, light intensity modulator, optical isolator.

The application of PPLN in all-optical communication networks has broad prospects, and has attracted extensive attention. In the high-speed optical communication system, we can use the chirped PPLN to form a Bragg grating structure, and a tunable dispersion compensation device. PPLN plays an important role in constructing high-performance all-optical time division multiplexers in optical time division multiplexing system (OTDM). It can also be used in high efficiency detection in optical code division multiple access (OCDMA). In addition, optical switch made of PPLN, with fast response, wide conversion bandwidth and low switching power, will also draw much attention in the future high-speed all-optical networks.

The addition of 5% MgO to LiNbO 3 can significantly increase the photo damage threshold and photorefractive coefficient of the crystal, while retaining the ultra-high nonlinear coefficient of PPLN crystal. Compared with undoped PPLN crystal,  Photonchina’s MgO:PPLN crystal can work more stably in lower temperature and visible light range. MgO:PPLN crystal can even operate at room temperature without temperature controller. For example, for 1550nm femtosecond frequency doubling, the crystal of 1mm or shorter can be chosen at room temperature, and the efficiency can reach 40-60%. When the ambient temperature reaches 200 ℃, MgO:PPLN can provide a wider wavelength range than undoped PPLN.

The Curve of MgO:PPLN crystal is shown in figure 1. 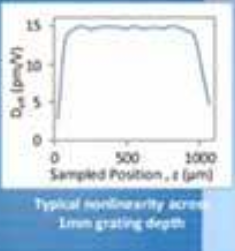 2. Waveguide structure contributes to integration of optical devices. Its High-efficiency coupling with external optical fibers is conducive to the development of miniaturization of devices.

With the  development of quasi phase matching technology, polarized crystals (Lithium Niobate, KTP) have the advantages of large effective nonlinear coefficient, high nonlinear conversion efficiency, no walk away effect, etc., which are widely used in nonlinear frequency conversion devices. At present, PPLN produced by Photonchina can be designed as efficiency converter of laser of any required wavelength, Wide range of applications: